You are using an out of date browser. It may not display this or other websites correctly.
You should upgrade or use an alternative browser.

This quest is accessible to every character, if they have the 3rd class quest completed. 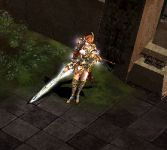 ​
After talking to her, she will send you to a special arena, where the quest will take place. In the first part, you will have to fight with the Cent herself.

In the second part you will have to fight against monsters from deep dungeon for 5 minutes while killing these monsters during the time:

In the last part you will have to fight Cent again, but this time she will have help from even more Deep Dungeon monsters.After you have defeated everyone, Cent will reward you with a new class, also you will obtain in your Gremory case a Scroll of Oblivion which is used to re-allocate points in the new skill tree enchantment.

The 4th class unlocks these abilities:

Hi, how i level up the Master level?
I didnt find any guise of that.
Tnx
M

Maraboli said:
Hi, how i level up the Master level?
I didnt find any guise of that.
Tnx
Click to expand...

just level up at higher maps, at low level maps you won't get any xp.